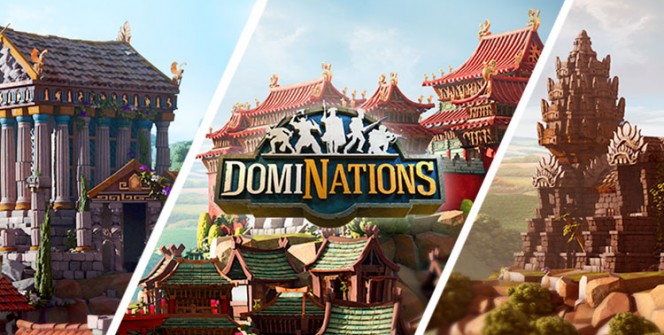 Download, Install and Play DomiNations on your Desktop or Laptop with Mobile App Emulators like Bluestacks, Nox, MEmu…etc.

How to Play DomiNations on PC (Easy Steps):

Download & Play DomiNations for PC without Bluestacks (Alternatives to Bluestacks)

Do you like games such as Civilization on PC? And do you want to play a similar, mobile version that can be played anytime and anywhere? If yes, then try out DomiNations by Nexon! This game is available for the Android and iOS platforms as a free to play title, and now you can play it on your desktop or laptop PC too with an Android emulator!

In DomiNations, you begin with a small, humble village consisting of a few buildings and a settler. Your goal is to survive through the various ages and get to the technology and development level of our modern world, while navigating diplomacy with other nations, waging war and expanding your empire. There are 8 unique civilizations to choose from: Romans, Chinese, British Empire, the French, Germans, Koreans, Japanese, and Greeks, each with their strengths and weaknesses.

Just like in Civilization, you gather resources, expand your empire, and discover new technologies. Unlike Civ, this game is more like Clash of Clans: you slowly amass resources, start researches which can take from mere minutes to several weeks, and expand and build your city just like you do in CoC. So there are no short matches in DomiNations, the entire game is a slow-paced, long-term persistent world.

Almost all game elements are carbon copies of CoC, with some Civilization-like flavor added in, so if you played any other mobile empire-building game, you will feel at home here, too.

There are three main game modes in DomiNations: base management, single-player missions and multiplayer raiding. The base management is simple: place down buildings and walls to arrange your base, periodically collect resources from mines and farms, and wait for the next upgrade or pack of troops to come out. The single-player missions are simple raids against pre-defined enemy bases, which get more difficult and advanced as you progress through the levels.

The multiplayer is a direct copy of Clash of Clans raiding: select your troops and tap on the outskirts of your assigned enemy base to spawn them, and they will automatically go and attack something according to their preferences. However, there is one major difference versus CoC: in this game, your surviving troops come back to base, only the fallen ones are gone, so there is less need for constant training of troops if you do well in raids.

Your base can be attacked and raided at almost any time, but you can get peace treaties that protect from attacks for a short while. Or you can join with other players in alliances to protect each other, help out with troops and resources, or just to play competitively against other alliances.

The game’s graphics are simple, detailed 2D isometric, similar to others in the genre. All civilizations look unique and have distinct building looks, adding some variety to it.

If you want to play DomiNations on your PC running Windows 7/8/8.1/10/XP, you can download the free Android apk, or if your Android emulator supports Google Play, then you can get it from there just like you would do on your phone.

I hope you enjoyed this guide, please rate and share. If you have problems running DomiNations on your PC or any other issues, leave a comment below.