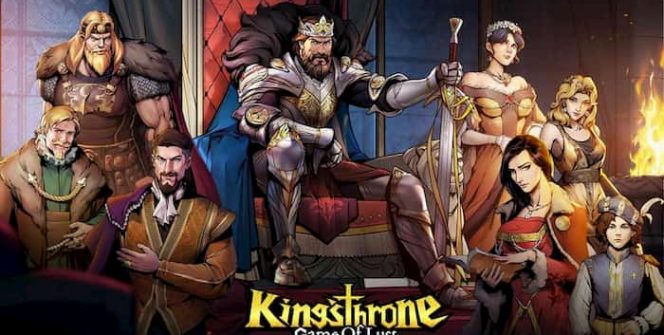 Forget Game of Thrones if you’re looking to play an epic game which will allow you to take the throne of your own kingdom check out King’s Throne: Game of Lust. To discover some of its key features simply continue reading to learn why Kings’ Throne: Game of Lust is quickly gaining a large following.

Download, Install and Play King’s Throne: Game of Lust on your Desktop or Laptop with Mobile App Emulators like Bluestacks, Nox, MEmu…etc.

How to Play King's Throne: Game of Lust on PC (Easy Steps): You’ll be able to date a wide variety of beautiful maidens.

If you enjoy dating sims you’ll love getting to date a wide array of gorgeous maidens. In order to meet new love interests simply explore your kingdom. As you’ll quickly bump into new maidens each time that you explore a new area of your kingdom.

You’ll be able to start your own dynasty.

In order to raise heirs with high stats make sure to nurture each of your children as they grow up. As heirs who are more educated and boast high stats are easier to marry off to the sons and daughters of high level allies. If you marry of your heirs well you will find that your nation score will increase as a result.

You can recruit knights to join your army.

As you progress through King’s Throne you’ll be able to recruit powerful heroic knights to fight for your kingdom.

You can join a round table alliance in order to fight foes as part of a strong alliance.

Just be careful to choose a round table which boasts high level players in order to increase your chances of winning battles and valuable rewards.

You can lead your army on expeditions.

The only way to expand your empire is to take over the land of your rivals. Thankfully you’ll be able to lead your army on expeditions in order to claim extra land to add to your growing nation. Just be sure to keep levelling up your knights so that you’ll be able to easily crush your enemies.

There are limited time events to complete.

One of the best ways to start levelling up quickly is to complete as many fun limited time events as you can. As most special events offer a large number of experience points. As well as rare rewards such as gifts for your girlfriends and wives.

So if you love the idea of being a powerful king who rules a large empire and who is free to date and marry as many maidens as he can it’s well worth playing King’s Throne: Game of Lust.

I hope you enjoyed this guide, please rate and share. If you have problems running King’s Throne: Game of Lust on your PC or any other issues, leave a comment below.

Forget Game of Thrones if you're looking to play an epic game which will allow you to take the throne of your own kingdom check out King's Throne: Game of